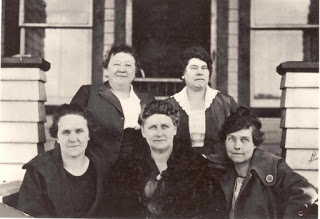 Photograph – JHHSM Collection 1958. 0263.001
In the past few days, I have been bombarded with articles, videos and comments sections filled with attack, finger pointing and hurtful words. Unfortunately, this rage is hurled back and forth, in most cases, by women.
At the same time, I encountered several messages, in a writer’s group, from women scared to use their voices. Some of the fear linked to the vulnerability required when sharing your words with the public, but I fear that part of the apprehension is attributed to a concern in becoming victim to an attack from someone fulfilling the need to prove their rightness.
It is reminiscent of the mass hysteria of the Salem Witch Trials, except witches have been replaced with opinions and pitch forks replaced with keyboards. We allow ourselves, as women, to become further divided by an invisible barrier. Eventually, we will find ourselves surrounded by wall after wall until, finally, we will each stand in solitary silence.
We continue to blare the sound of why we are right, instead of listening to the reasons we might be wrong and, in the process, censor the voices that could possibly offer insight due to their fear of being forced to a side.
The scariest part, some of our most objective and positive voices are being muted. When we, as women, begin silencing each other, we are undoing all of the hard work endured by those before us to allow the opportunity for our voices to be heard. Remember, there is room for everyone’s voice in the choir, we just need be sure we do not drown one another out.
We have become deaf to the world of possibility. The possibility we could be wrong, the possibility we all lead very different lives, the possibility someone else’s opinion can still be valid even if doesn’t align with our own, the possibility that support doesn’t necessarily equal agreement and the possibility that our voices become more powerful when they blend together.
Angry voices have evoked change in the past, but more often than not, we lose our listener when anger turns to rage. I am not referring to angry voices demanding change, I am referring to rageful voices demanding to be recognized as right. When we become too arrogant to admit there is a chance, however slight, that we could be wrong, we lose the ability to communicate and, unfortunately, it seems this is the path many are currently traveling.
I continue to remain hopeful and hope, for me, came in the form of a small article shared by the female voices of one of my favorite families. An article about the Petticoat Rulers, a group of women who ran and won for Mayor and Council in a little town called Jackson, Wyoming in May of 1920, shortly after the Spanish flu pandemic. The women had won an election, in spite of the fact they had not yet been granted the right to vote by the government. A group of women had won and promptly appointed women to hold other municipal positions. Three months into their term, the 19th amendment was passed. In 1922, when asked about their assistance in proving that women could not only hold political opinions, but were capable as effective leaders, Mayor Grace Miller replied “We simply tried to work together.”
Nearly 100 years later, I believe we still have much to learn from those words.

Full-time mom, part-time writer. Serving up thoughts on parenting, life and love in between forgetting to fold laundry in the dryer, threatening to take away Ipads and looking for my patience. View more posts